Keeping it short and simple this week. I stained a little letter using a fun and easy technique.

For this project I used a little monogram from target but if you have a good scroll or jig saw you can make your own shapes. 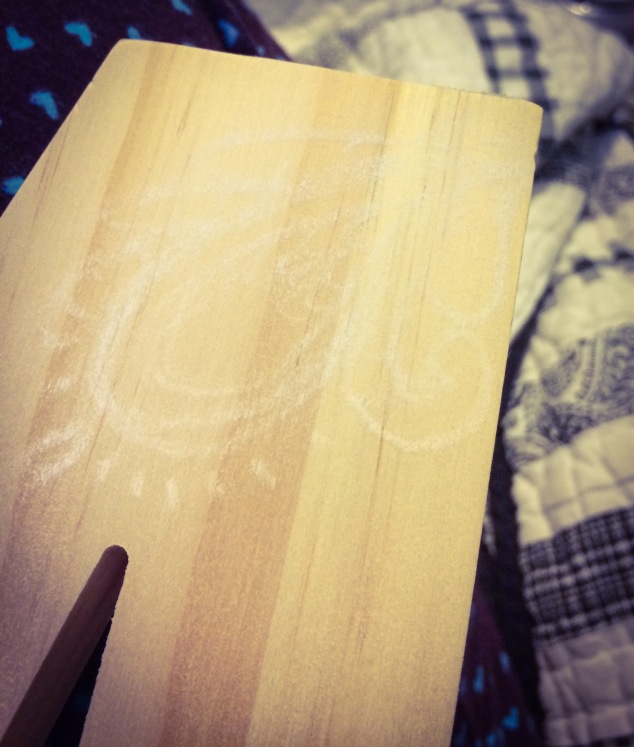 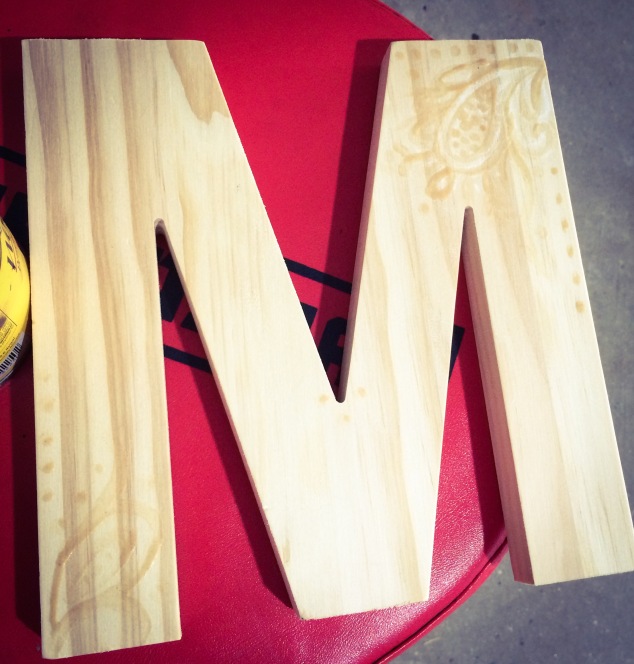 Voila your pattern is left natural.

It’s a quick and easy way to add detail to a project and it’s pretty versatile as well. If you’re not comfortable free handing a pattern you can always mask off a geometric pattern like stripes or chevrons.

Okay, not late. In fact, very early. Halloween is over a month away but I couldn’t help trying out a costume. I was actually inspired by the clock I demolished then repurposed way back in this blog post here.

I’ve always loved Alice in Wonderland but I’ve never been able to pull off Alice herself (ok maybe when I was like, 6 with glorious long blond hair) 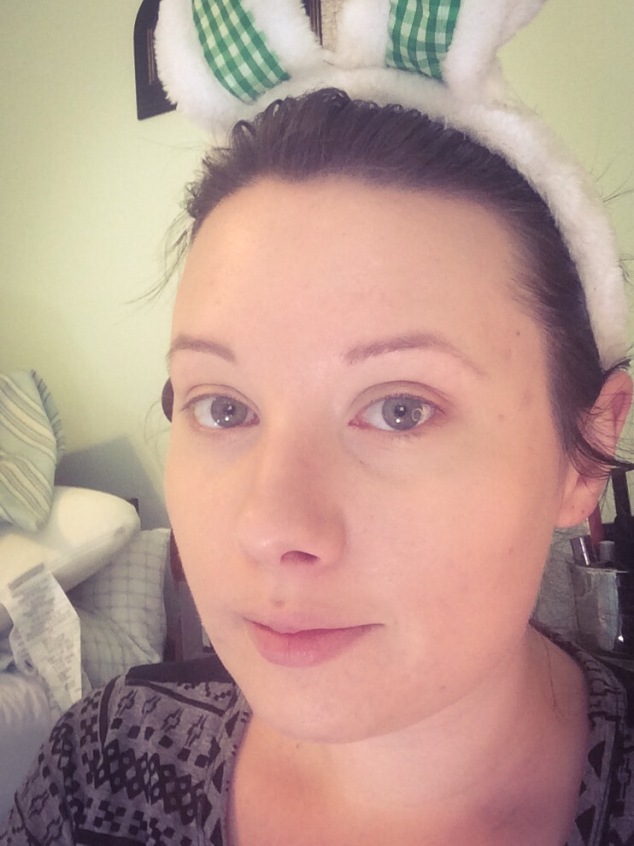 So enter the white rabbit

I started with a base of high coverage foundation

Then went in with white cream to highlight or bring certain features forward. Making my nose and upper lip appear more protuberant. I started out using a cream face paint then just decided NYX shadow base in Milk would work better, it did.

I then did some cream shadows to get a more herbavore face going. A stark shadow low under the cheek bone and under the jaw line and down the nose and a little bit of shadow to upturn the lips. I kept all of these shadows grey to stay with in the monochromatic look.

Then I set everything and intensified it with powders, turns out I don’t have a stark white powder but a slightly pearlescent eyeshadow worked relatively well and added a little more dimension

On to a few details I used a black eyeliner to do the philtrum (that little cleft under the nose) and black and grey to do the eye brows.

And I used a baby pink lipstick set with shadow for the nose. 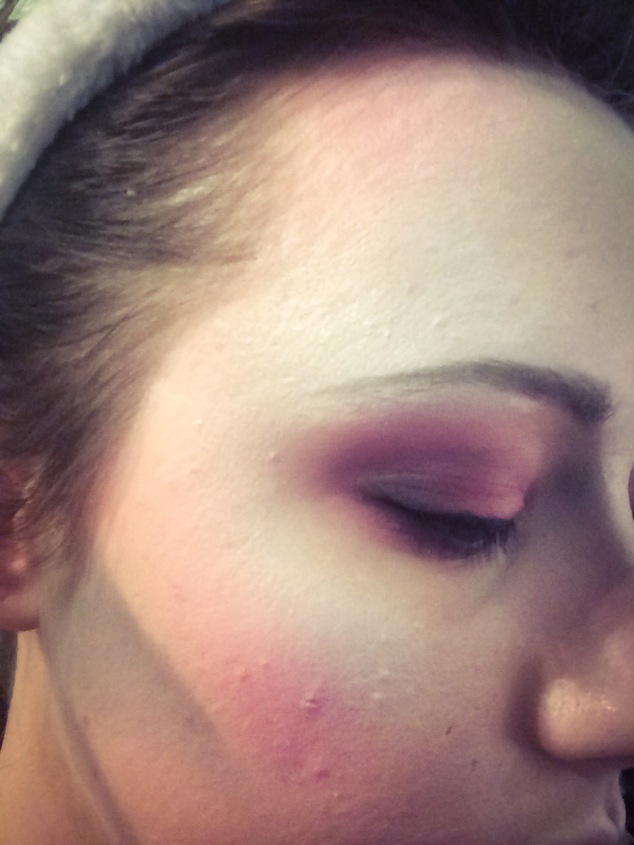 For the eyes I did a really simple smokey look just running black liner through the water and tight line and smudging it through the lash line and along the crease. I wanted to keep it messy and easy. To give it some color I used the same pink shadow (or blush) I used on my nose to blend around the crease of the eye. Liberal amounts of mascara or false lashes and the eyes were done

I also applied liberal amounts of blush which you can see in the eyeshadow picture.  I took it from the apples of the cheeks up to the temple area. To make sure I didn’t lose the highlight effect I did touch up with the pearlescent white as a cheekbone highlight.

Now the fun details. I just took a small detail brush and using the same pink as before began to draw a clock face around one of my eyes. Enter the crisis where I can’t figure out if I did the clock face backwards thanks to how my spacial reasoning sucks then you add mirrors to that.

Once I was satisfied with the placement I started to intensify it with darker colors making it look as though it were a shadow or brand on the face. First grey then a little black.

Pop on some ears pin up the hair. 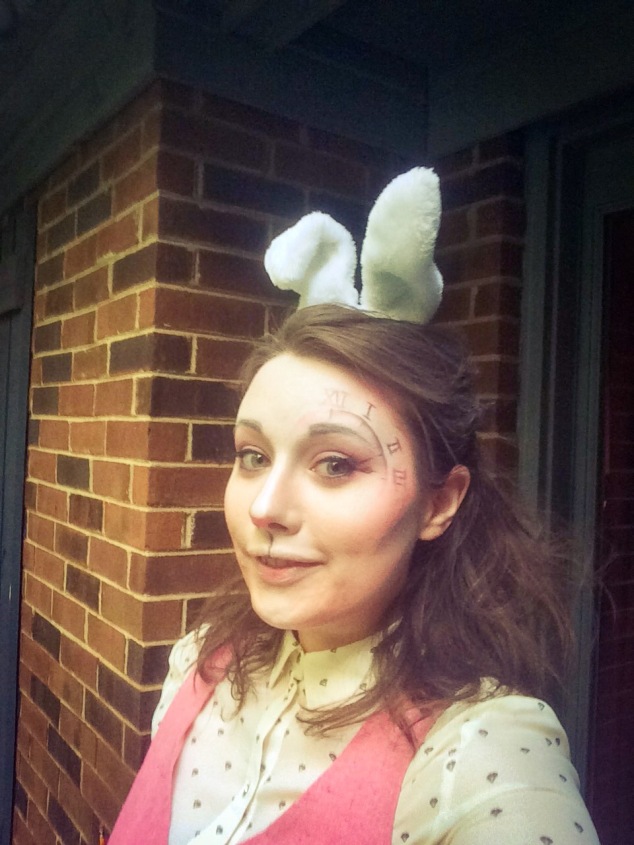 And put on your bunny smile.

I don’t have all my accessories yet. There will be a giant bow tie and of course my clock lantern. But I’m pretty happy with how it turned out for a first attempt.

After the little paintings I did a few weeks ago I thought I might experiment some more with painting on canvas. I should preface this with the fact that it was an all around bad idea

The problem is I have no idea what I’m doing when it comes to painting canvas. I can paint on faces,  you will get to see more of that next week but paint and canvas baffles me. 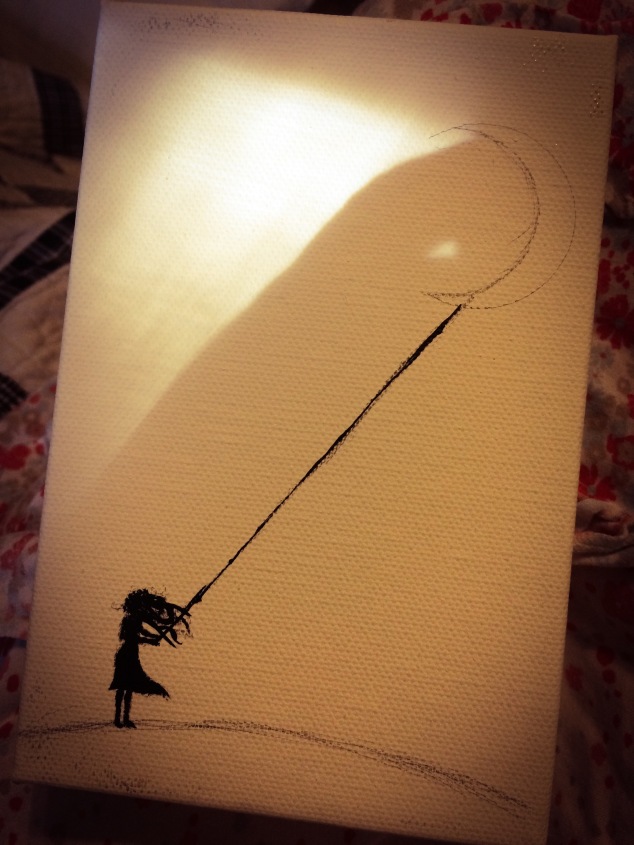 I’m not sure what brushes blend well, as was the case with this first experiment. I’m pretty sure the brush I used was too stiff, so I got some strange brush strokes going on.

I’m not really sure what order to put colors down in, this was  also a problem with this painting.   Hint; don’t try to put the blue of your sky over the yellow of your sunset or you end up with a strange green sky.

So the whole thing has been a process of learning through experimentation.

But you guys are allowed to see my failures as well as my successes.

It’s not terrible, I just don’t really like how the little cartoony mermaid subject looks… I should have known I’m just not good at figures. I’ve still got four canvases to play with so if anyone has any tips or blogs they recommend they would be greatly appreciated.

Clearance isles are the bane of my existence. This has already been established. But I couldn’t resist these little beauties 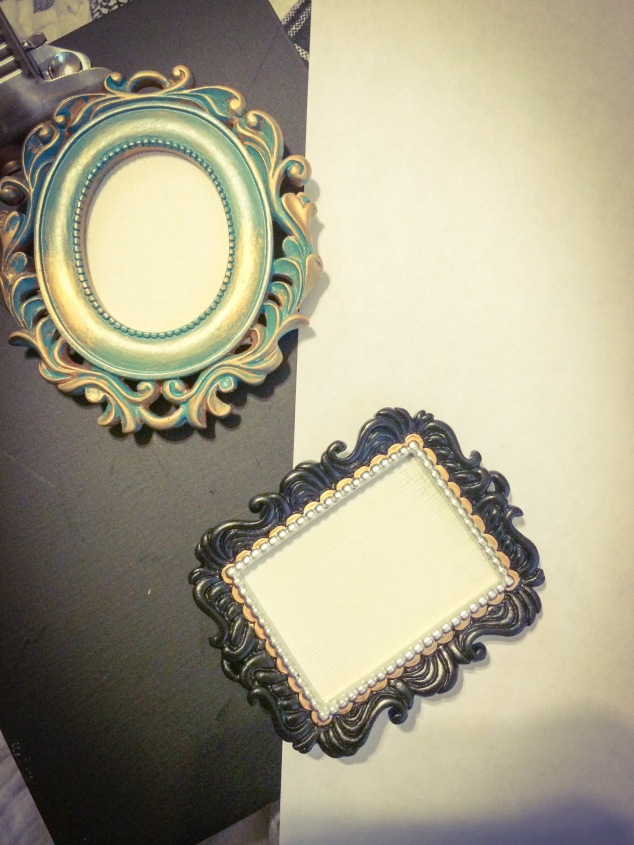 They are pendant frames, though to big for me to imagine actually wearing it as a pendant they are still very small.

I knew almost immediately what I wanted to do with them, I just needed cooperative subjects.

So I sat Mr. Smith down for a picture. Then I had to get him to take a profile picture of me. That was a little harder since it was me trying to direct him so that he was exactly beside me. Height difference and all

I then printed off those pictures and cut out the silhouettes

Because the pictures were taken from different distances and different orientations (portrait vs. landscape) I then used my copier to shrink them down to appropriate and equal sizes.

As you can see my hair was a little to big and wild to fit in an oval frame and the texture of the canvas made using a sharpie not ideal. I’ll likely go over all of this with paint. Perhaps when I’m more comfortable with the medium given this week’s endeavors. It’s been all down hill since last week.