Preface: Yes that was a Borderlands reference. Yes they have been rather frequent of late. What can I say, I’ve been playing the hell out of some Pre-Sequel in what little free time I have.

So there was recently (and by recently I mean back on October 17th … of 2014 if you happen to be reading my backlogs) an article about millennials being pretty terrible at textile care. You can read it here. If you’re lazy though it basically says that due to our parents’ workplace demands and the lack of funding for things like home economics courses in schools we really don’t have a clue when it comes to darning socks and hemming pants and getting out grease stains or even (in some extreme cases) sewing on a button.

This blog post was really supposed to be about this little robot I met on Amazon.

I couldn’t resist him. So instead I have a blog post embedded in a blog post. His full story will be after the rantings.

But there are a lot of things that we (my generation) didn’t have the privilege of having passed down to us. I was lucky. I have an amazing grandmother who can sew and crochet circles around most people. When I was 17-18 years old she mentored me through my senior project of making a quilt. … A freaking quilt.

Yup! This quilt here, which due to my glorious lack of children has been adopted by my cat… oh god I sound like those forever alone people.

So yes I have hemmed my pants, I have sewn an invisible zipper back into a skirt, I have put a new lining into a favorite vest, I’ve even been known to darn a favorite pair of socks or that oversized cardigan that I just can’t bring myself to give up. But again I’m one of the lucky ones. I also know when it’s going to be cheaper, cost and time wise to just throw it away and buy a new one. Unfortunately that’s most of the time. The aforementioned article states that 5.7% of solid waste was textiles in 2012. Likely because in the 20 minutes that it would take to sew in a $5 zipper on a pair of faded pants, you could have bought a brand new pair for $30. In that 20 minutes earning optimistically for a 20 something $500 a week and having student debt in excess of $15,000 … you could just buy the damned pants and save yourself the heartache… or you could just learn how to sew and save yourself $25. You may not have an amazing grandmother to teach you how to sew, but there are lots of amazing grandmothers on YouTube that will teach you. Go find them.

So on to the meat of the story.

I met a little robot on Amazon I couldn’t resist. The kit came with absolutely everything you need including the little tiny hoop and it was less than $4 with free shipping.

Cross stitch is really very simple and importantly for me, very relaxing. You make a bunch of little slash marks then go back over them the opposite direction to make crosses. 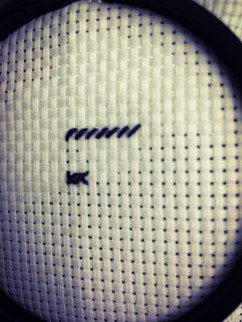 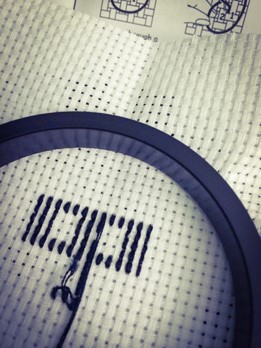 This leaves the back of your stitching with lots of vertical lines. 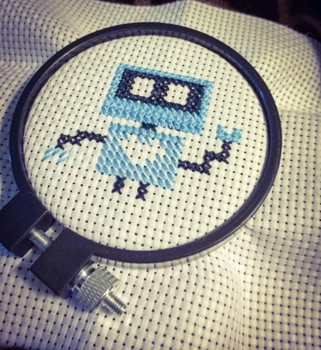 Time for the tin man to get his heart.

Then it’s on to backstitching. Which is exactly what it sounds like.

You make straight stitches then go back on them to make a solid line.

Now he just needs some eyes. 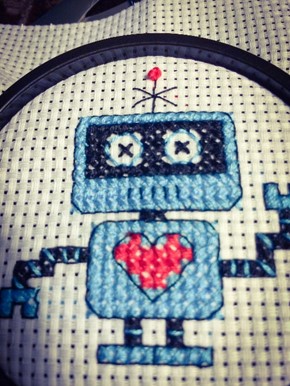 Oh no! not dead eyes.

In addition to having an amazing grandmother I also once had an amazing art teacher. She gave us a cross stitching assignment once. We had to design our own pattern. Which involved the mathematics of figuring out the symmetry of the pattern and the midpoint/starting point. It also gave us sewing skills. Needless to say a bunch of 11 year old boys in the class weren’t particularly thrilled about it when we first started. Then they figured out the pattern could be anything they wanted as long as it had either horizontal or vertical symmetry. There were lots of flames and skulls and cars. It was pretty cool to see my classmates sewing away at their crazy creations. I’m really thankful I had such wonderful teachers both inside and outside the classroom growing up.

I also highly recommend a project like this to any teachers or parents looking for projects for their kids. Cross stitching needles are blunt so no worries there and you can also get the plastic canvas style needlepoint for even smaller fingers.