So I’ve been avoiding doing any posts about skin care or makeup. Yes I do this stuff for a living, that doesn’t mean I’m confident in my abilities.

But… It’s Halloween, It’s my favorite time of year and an excuse to be someone different for a change. So I thought I would show off what I’ve been doing lately.

Last year I had a couple of different costumes.

My social costume was Marceline the Vampire Queen. Although technically I wore the clothing pertaining to Marshall Lee because a little boy’s black and red plaid shirt was far easier to find and implement. Not to mention something I’m likely to wear again. 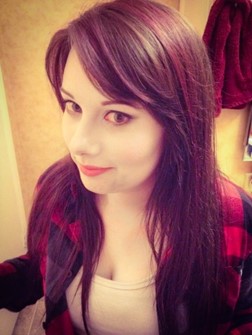 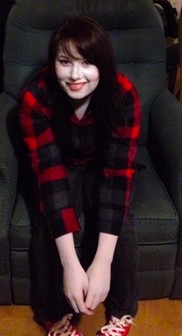 Marceline and Marshall Lee in case you’re not hip to the kids.

And my work costume was a Tiger. Never underestimate a pair of cheap costume ears as inspiration for a costume 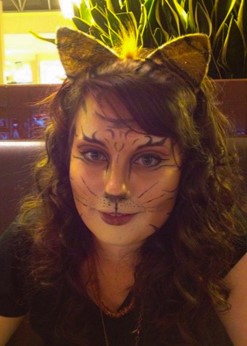 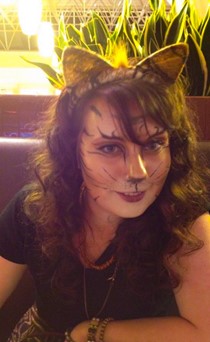 Oddly I have a collection of costume ears. It all started with a pair of bunny ears to hold my hair out of my face while I washed it or did my makeup … It’s gotten a bit out of hand since then.

Luckily this makes for a great party game that I had the privilege of playing this weekend at a Halloween themed bridal shower. Think “Who Am I” only with animal ears on your head. The devil horns made for a bit of a puzzler. “Do I have wings?”….That wasn’t really a yes or no question, we had to think about how to answer that for a moment.

I also had the privilege of being involved in a Halloween themed wedding this weekend. The ceremony was relatively normal and exceptionally gorgeous, until the zombies showed up. No seriously, there were zombies. Then the reception was costumes encouraged. Being the crazy person that I am I took fifteen minutes and dashed to the bathroom to transform from a lovely bridesmaid to the living dead. I’ll link to the video tutorial the groom sent me that inspired my quick change here. 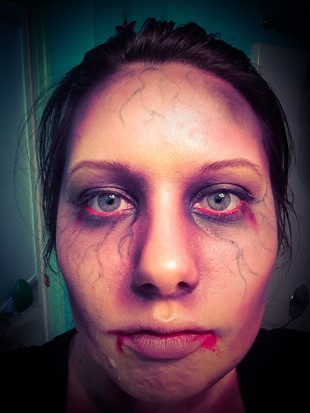 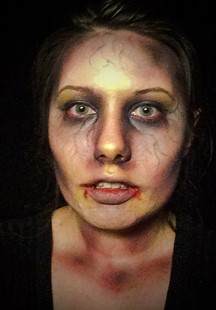 These are pictures from my preliminary run through to figure out if I could actually do it in 10minutes. Turns out I could.

I was enjoying myself too much at the reception to bother with pictures.

All this being said I think the way to break my fear of posting makeup blogs is to just do costume makeup. I could work around a pair of ears and do a costume related post every month. It might also help me not run out of blog posts, which is super exciting as I am running out of projects or rather time to do them having just started a new job. I love doing costume makeup despite the fact that I don’t actually own any “costume makeup”. I’ve always just used makeup I already have. Things like bronzer (a.k.a. Tiger orange) and black khol liners and lipstick (blood more blood) and lots of eyeshadow.

I actually Have yet to figure out what I’m being this Halloween. It was suggested that I just do the zombie, but that is definitely not work appropriate. And I’ve tried out a couple of other looks the last month or so. Without loving them unfortunately. 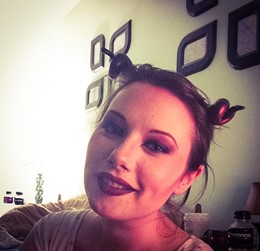 I have the most marvelous devil horns, but this look just wasn’t… dramatic? .. enough for me. 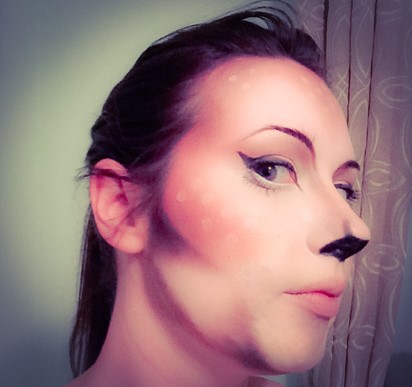 And this look though really fun and surprisingly easy… I just don’t know what it is. Though a friend did point out that I look a bit like the captain from Treasure Planet

At any rate it’s something I’m new at so criticism or critiquing is certainly welcome and appreciated because I’m learning and love to do so. Also my amazon wish list just got super weird having decided to do this with things like liquid latex and rigid collodion and … yeah its super odd.
I’ll have a post up later about what I actually ended up doing for Halloween.

4 thoughts on “Night of the living Wed”