Do you remember that clock I murdered so ferociously without any thought of what I might do with it.

If you don’t you can find it here.

Well I figured out what to do with it in a somewhat round about fashion. I had considered turning it into a lamp but … well, it seemed complicated and despite how this blog may make me appear I’m a lazy person. Then I came across these lovelies on Amazon. They are the tiniest fairy lights you’ve ever seen. They are battery powered and oddly the strand is waterproof. I don’t need it to be but that’s cool none the less.

I also found a roll of window frost on amazon with good reviews. I’ve got a bathroom window that needs frosting and it will only take about 6 square inches of the 9ft roll to do this project so its worth it.

The next bit got a little complicated. Only because I made it so. It doesn’t need to be. I laid the glass over some pretty scrapbooking paper and laid down the frost contact paper over top of it letting the excess hang over the edge to secure it in place. I then used a Knife of Exact Zero* to cut out the pattern of the scrapbooking paper into the contact paper. You can purchase frosted contact paper that has patterns like this in it ready made. I opted for regular old frost since it’s something I’m going to be using for multiple projects, including some I just want to be plain. I decided to stick with the cheaper and more boring frost, and thus created a little bit more work for myself. 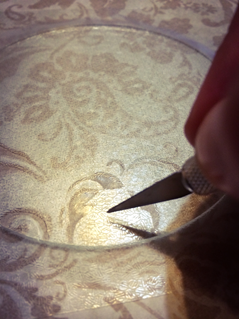 I then reassembled the glass and faceplate just securing it with a bit of glue and strung the itty bitty adorable lights through the back plate where the clockwork used to be.

A lantern for your next glamping trip

You could skip the pattern in the frost or skip the frost all together by placing some tissue paper (any color) in the lantern. I (or rather my mother) discovered this after the fact but I actually like it a bit better as it also manages to diffuse the light a bit more and hide the wires a bit better. The header picture is of the clock/lantern on with tissue paper behind the face. 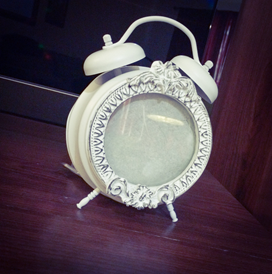 At any rate I’m glad our sad, neglected, noisy clock found new life as a glamorous lantern. It will likely come in handy during our regular power outages. What other objects can you think of upcycling into lanterns?

8 thoughts on “Resurrection, or A Lantern for That Glamping Trip”