I stated in On the Horizon that there were a lot of projects I had done before I started this blog. Really that’s the whole reason I started this blog. That and some pretty fierce and wonderful prompting from my boyfriend. It seemed about time I document my crazy and creative endeavors for the world to see, or at least so I can remember how I accomplished such a thing down the road a ways.

I’m really quite terrible at taking before and after pictures. I remodeled the house I lived in one time. The whole kit and caboodle, 1960’s floors to popcorn ceiling. We completely forgot to take before pictures. So no one ever believes me when I tell them it had orange shag carpet throughout. When I say throughout I mean even in the bathrooms. Live and learn. Your camera phone is your friend.

I hate switch plate covers. Particularly ones that are the hideous contractor’s choice beige. It just looks constantly dirty. Sure you can buy new ones for pretty cheap, but you can also mod podge them for pretty cheap, and it turns out much cooler. It also happens to make the light switches easier to find fumbling around in a dim room, and comes off with hot soapy water so this is something you can easily do in a rental.

The wall-o-money is really rather self-explanatory. I have an inordinate amount of foreign money and saw a rather wonderful way to display it on Pinterest one day. So some old frames, some new frames, some paint, and some craft paper and I had myself a strange bit of “art work” for my once bare walls. As a warning it is heavy stuff. You may also notice with a coin collection, whether foreign or domestic that the coins are varying thicknesses. I got around this with a little Styrofoam backing which a lot of new frames will come with. As strange as this looks to people I like to point out that I have a frame full of absolutely worthless currency as the majority of it is pre-Euro era European currency. “It’s a commentary on the transient nature of wealth and the shallowness of our material culture.” Damn right it’s “art work”. 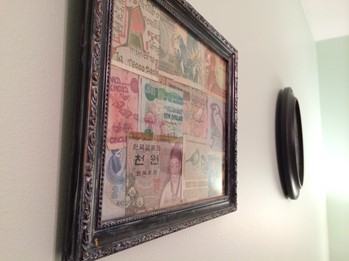 Did I mention in addition to being ridiculously girly I have a … nerdy streak? I’m not entirely sure you would call it that. Put it this way, I play video games (perhaps too much) I like comic books and super heroes (who doesn’t?) and I have a soft spot for quantum physics (mechanics just to placate my boyfriend). Anyway, I think this was my favorite project of last year. I was bored and between jobs so I needed a cheap and yet time consuming project. The super hero coasters were born. Let me know if you would like to see a tutorial on how I created these. I’ll take any excuse to do some more even though I’m pretty sure six is plenty. 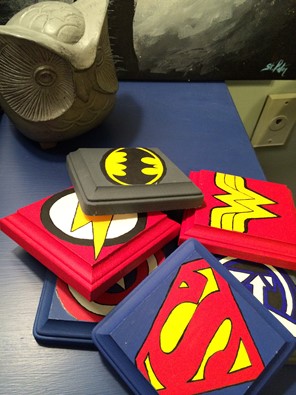 Of course there have been other painting projects as well. This sad shabby microwave stand got an update as a tv stand 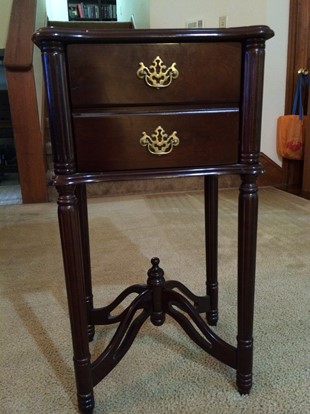 Once again let me know if there are any projects you would like to see me create (or reacreate) in future blogs. And let me know what you think by commenting, liking, subscribing, following on Facebook or just sitting there reading. I appreciate all of it.